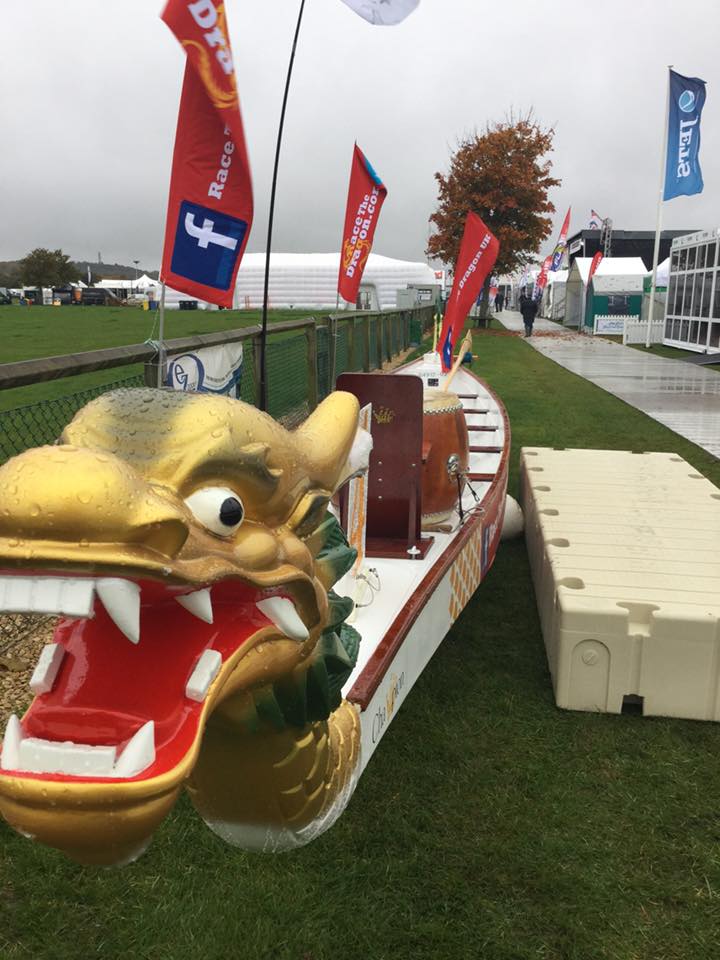 The showman’s show was a great exhibition to be a part of, there was so much entertainment for visitors of the show and exhibitors alike, such as stunt bikes, horse riders and fire breathers. Race the dragon were placed in the heart of the action, right next to the main Show arena.

During the first day of the show we meet so many fellow dragon boaters, it was so great to share our experience and passion with people who had never heard of dragon boating before! Throughout the day we had a lot of visitors at our stand whether that was to take part in the ergo challenge or to get some more knowledge about us.

We exhibited with Pontoon & Dock company ltd at the event, due to this we had many different features at our stand such as chocolates, a fully functioning bar, coffee machine and experts who know the ins and outs of dragon boating. From this we had great feedback from visitors and other exhibitors of the show.

Pontoon and Dock’s stand had a lot of interaction with people at the show, with Head of marketing – Racheal and Marine Consultant – Roger, they are distributors for some of the world’s largest marina equipment manufactures providing Pontoon hire, pontoon walkways, boat transporters, cradles and much more.

We also became movie directors for the day by using the Seen in app where we could create a 30 second video about our day or information on our company that would then be compiled into a large post show video with several other exhibitors at the show, this was the first time we used this platform of media but thought it was very effective way to show anyone who missed the show and explain why we were exhibiting and a little bit about ourselves.

Not only did we meet with a variety of interesting people at the show but we also featured in an interview for Silver Stream TV where our events director Julian, gave an insight to how dragon boating worked and what Race the Dragon can do for you. http://video.silverstream.tv/view/J7ponJyC

The ergo challenge had over 100 people compete for a bottle of champagne and there was some very impressive distances, our ladies winner, Abbie from Loos for Do’s smashed out a distance of 115.3 meters, our men’s winner Eddie from West Country Marquees powered through and received a distance of 171.4 meters, both were awarded at the end of the 2nd day with a well-deserved bottle of champagne.

After the event, to celebrate the two days, Standout hosted a great showman’s party with outstanding music, delicious food and such an amazing setting. Thanks to Caroline, Sarah, Neil and the rest of the stand out team for such an unforgettable experience, happy 10th birthday Standout.

Another year, another great Showman’s Show…